INTERVIEW of the CHAIR of TRANSPARENCY INTERNATIONAL-GREECE, Dr DAMASKOU ANNA to THE NATIONAL HERALD on 06.03.2018 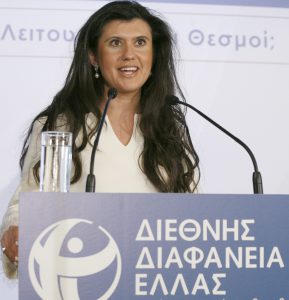 Greece’s lowly position regarding transparency, corruption, bribery and related scandals seems barely to change, up a little, down a little, but otherwise a seeming constant sign of acceptance of these phenomena. Do you worry or wonder whether it will ever really change?
I wouldn’t really agree with you. During the last five years, Greece marks an improvement as evidenced by Transparency International’s Corruption Perception Index, which measures the perception of experts and of the business community regarding corruption in the public sector. In more detail, in 2017, Greece improved by 10 positions compared to 2016. This improvement is the clear outcome of the significant number of reforms that Greece really achieved during the last years. What remains sad, though, is that the “authors” of all those reforms are the country’s international lenders and not Greeks!
Since Greeks benefit in some ways from corruption – jobs through patronage, lower prices when they don’t ask for receipts, etc. – isn’t there an incentive for them to look the other way as well?
I am rather convinced that the severe austerity measures, together with the high taxation rates, have changed –or at least are changing- this public perception. Greeks, who, in many cases, have been deprived even of the basics, while at the same time they are obliged to pay a significant percentage of their income in taxes, do not tolerate anymore those tax-evading. They have realized that what tax-evaders do not pay will be paid by them, the compliant tax-payers, which constitute the vast majority of tax-payers.
There’s a long line of scandals that are sensational for some days then disappear off the front pages only to be forgotten and few every really brought to justice. Isn’t that just how the way things work here? Why is there impunity for corruption and bribery?
What is not on the front page of a newspaper anymore does not necessarily mean that it does not lie on the desk of a judge! Judges have the authority to initiate on their own the investigation of a case, upon criminal indications found in press or even in rumors. What worries me more is those issues concerning ethics which do not amount to crimes; it often happens that they play highly on the news for a few days and then they are forgotten, without any competent authority taking action towards enacting legislation for the prohibition of such unethical practices or towards amending an existing unethical law.
Even when people are convicted – the former Mayor of Thessaloniki, Tsochatzopoulos,for example, they are allowed out on health reasons and it seems no one serves a full sentence. How is that tolerated by society?
Let’s not allow populistic attitudes erode the core of human rights. We are privileged to live in the civilized part of the world, where human rights, such as the right to life and proper healthcare, override other considerations – as long as, of course, the health problems in name are real and independently verified.
Where did all the money go that was stolen by those convicted of these crimes?
The money has been traced – authorities know if and where they exist. The question is rather whether those criminally-obtained assets will be adequately recovered and also within a short period of time. This is the real legal challenge, especially for the assets traced in foreign jurisdictions. However, non-effective asset recovery is not a Greek privilege. The whole world still struggles with this issue, although significant steps forward have already been made.
Why aren’t there more whistleblowers in Greece?
Ask yourself – would you personally become a whistleblower in Greece today? Have you been convinced that if you, a clean-handed person, opt to speak up and report a wrongdoing, you will be adequately protected? Highly probable that you would not! Transparency International-Greece has launched an ongoing widespread campaign and advocacy on the matter since 2013 – initially for the introduction of the notion of “whistleblower” into the Greek legal system and, since 2014, when the notion of “whistleblower” was actually introduced into the Greek legal system, for the enhancement of the protection of whistleblowers, as well as for the expansion of the scheme in a far greater spectrum of wrongdoings and not only financial crime-related ones. Transparency International-Greece has not reached its ultimate target yet in the matter and we are also sad to remark that the recent Novartis scandal has seriously traumatized the credibility of the institution, which is, however, absolutely necessary for the uncovering of corrupt practices, since the latter usually develop in the darkness for ages, but with a wide circle of persons knowing about them.
What can you do in your position, besides what we call jawboning – urging, pushing, cajoling, etc. – to do anything or do you feel whatever TI says is either ignored or gets faint praise but no real action?
Transparency International-Greece, although just an NGO, has managed to constitute a well-respected entity in the country, whose views are in most cases sought by the competent governmental authorities, as well as by the business community. However, Transparency International-Greece does more than just expressing views: we are always in the battlements for the introduction of best practices in the country, as public perceptions change not through preaching, but through long-term, loyal compliance with best practices, which eventually yields fruits sincerely appreciated by citizens.
The fight against corruption is tough and long-lasting. No matter how hard we fight, wrongdoers will always fight back, perhaps even more fiercely. However, contrary to them, we fight for our own core values, such as democracy, human rights, meritocracy, transparency and accountability. In an environment of severe austerity, like the one currently in Greece, it is our less privileged compatriots whose human rights are mostly impaired – the privileged ones will always find a way to get what they want. It is the less privileged for whom Transparency International-Greece fights more!